Bern launches tender for up to 50 low-floor LRVs

BERN public transport operator Bernmobil has launched a tender for up to 50 low-floor LRVs, which are due to enter service on the metre-gauge tram network in the Swiss capital from 2023 onwards. 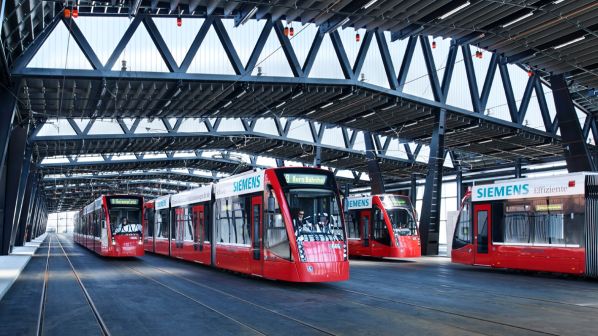 The newest trams in the Bernmobil fleet are the 21 Siemens Combino Classic LRVs delivered in 2009-2010.
Photo Credit: Bernmobil

Bernmobil says it has reached an agreement with Bern Solothurn Regional Transport (RBS) to procure replacement vehicles for Line 6, which will enable further standardisation of the fleet.

The vehicles will be at least 43m long with a minimum of 52 seats.

The contract will include an option for 30 additional vehicles, reflecting the need to expand the fleet for the Bern - Ostermundingen Tram (TBO) project and the extension of Line 9 from Wabern to Kleinwabern.

Suppliers have until the beginning of March to submit bids and Bernmobil plans to award the contract by the end of 2019. Delivery of the initial batch of 20 vehicles will take place between early 2023 and autumn 2024.

Bernmobil says the total value of the order for 50 vehicles is estimated to be around SFr 100m ($US 100m), making it the largest rolling stock procurement in the company’s history.

For further details of this and hundreds of other railway tenders around the world subscribe to Global Rail Tenders.