THE French city of Besançon celebrated the inauguration of its first light rail line on August 30 with two days of festivities marking the completion of what is hailed by the city as the "lowest-cost tram line in France." 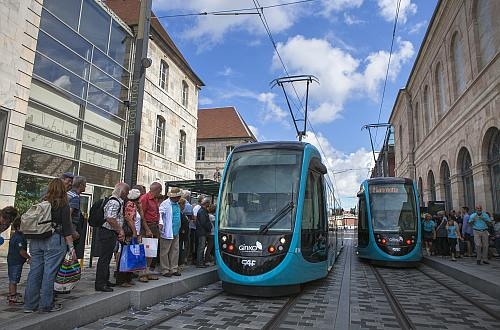 The mayor of Besançon Mr Jean-Louis Fousseret cut the ribbon to open the line, which has been completed six months ahead of schedule.

The 31-station 14.5km line from Hauts du Chazal to Viotte Station and Chalezeule was built at a cost of just €254m or €17.5m per km, significantly less than the average of €25-30m for light rail construction in France. This was achieved by limiting spending throughout the project with standardised and simplified stations, structures, and equipment.

The city cut the cost of its fleet of 19 LRVs to €35.2m by opening the request for proposals to seven bidders, when most French cities would allow no more than three or four.

The winner of the tender was CAF, a newcomer to the French LRV market. CAF is supplying a standard 23.6m-long three-section version of its Urbos low-floor LRV, which accommodates up to 132 passengers.

Line 1 is expected to carry around 50,000 passengers per day.