The Gold Coast light rail system will be extended from Burleigh Heads to Coolangatta at a cost of $A 2.5bn. 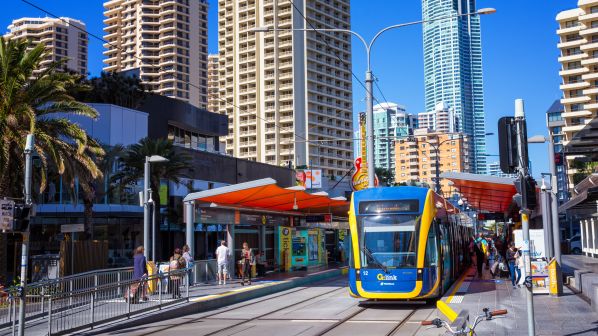 The extension to the Gold Coast light rail system, Stage 4 of the project, will run from Burleigh Heads to Coolangatta and cost $A 2.5bn ($US 1.9bn).

The move comes in the wake of Brisbane being named as “preferred partner” to begin talks over hosting the Olympic and Paralympic Games in 2032.

The Gold Coast, 70km south of Brisbane, would play a key role in any Olympic bid after hosting the 2018 Commonwealth Games. If Brisbane secures the games, it would be the third Australian city to host an Olympics.

Work on the Broadbeach - Burleigh Head section (Stage 3) is yet to start, but a business case for the 13km Stage 4, which will run via the Gold Coast airport, is “well under way.” Work could start as soon as 2023 once Stage 3 is completed.

“That would be the ideal outcome,” says Queensland minister for transport and main roads, Mr Mark Bailey. “All of the 800 workers could then transfer to the next stage and you would have a guaranteed pipeline of work.”

The double track extension would run along an existing rail alignment. Construction could run straight through the centre of Burleigh Heads and on to Coolangatta. The light rail project has been designed to be delivered in stages as the local population grows.

Meanwhile, GHD Woodhead, together with its parent GHD, has been awarded the design contract for three stations on the line linking Brisbane and the Gold Coast. The new stations are being delivered in conjunction with Brisbane’s Cross River Rail project, taking the total number of stations on the line to 23.

The stations - Pimpama, Merrimac, and Helensvale - are located on the Gold Coast’s so-called “glitter strip” party district. The state government allocated $A 120m for the stations almost two years ago.

“GHD will refine the existing concept designs for each station, producing detailed designs, documentation and approvals ready for construction," Bailey says. “As part of the detailed design phase, additional studies will be undertaken including construction methodology, noise modelling, flood modelling and flora and fauna studies.”

The stations are expected to be operational in time for the opening of Brisbane’s $A 5.4bn Cross River Rail project, a 10.2km line from Dutton Park to Bowen Hills. The project includes a 5.9km twin-bore tunnel under the Brisbane River and CBD, four new underground stations and upgrades to existing stations.

For detailed data on light rail and conventional projects in Australia, subscribe to IRJ Pro.