THE opening of an extension of the Wolverhampton - Birmingham Midland Metro light rail line to Birmingham New Street station finally took place on May 30 following track remedial works which had forced the postponement of the original opening scheduled for May 22. 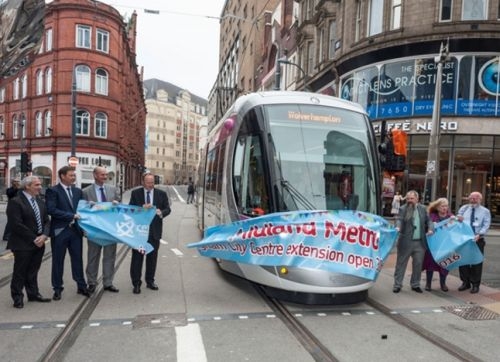 The first section of the 1.4km extension from Snow Hill station to Bull Street opened on December 6 and services were scheduled to start running from Bull Street to Stephenson Street to connect with main line trains at New Street station from Sunday May 22 but were delayed until May 30 when safety checks revealed track defects.

Announcing the delay prior to May 22, Mr Phil Hewitt, Centro's Midland Metro programme director, said: "It is bitterly disappointing as everything else is in place and ready to go but, as we have said right from the start, safety is paramount. A stringent testing programme has identified minor anomalies in some of the track alignment which need to be addressed." This work has now been completed allowing the opening to take place on May 30.

Construction has begun on a 1.3km extension from Stephenson Street to Centenary Square, which will open in 2019, and funding has been earmarked to extend the line along Broad Street to Edgbaston by 2021. A 2.5km branch to Digbeth, to serve the planned High Speed 2 station at Curzon Street, is expected to open by 2023.