THE British seaside town of Blackpool held a ceremony today to mark the completion of a £101m, four-year refurbishment project, which includes the delivery of 16 Bombardier Flexity 2 LRVs. 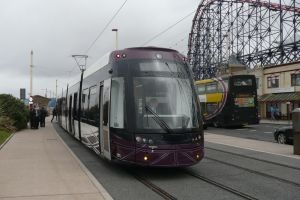 The new LRVs were ordered by Blackpool Town Council and Lancashire County Council in contract worth £33m in July 2009 for use on the revitalised 17.7km Blackpool and Fleetwood tramway. The new vehicles will operate alternately on holidays and at weekends with the network's double-deck heritage trams at five-minute headways.
In total £101m has been spent on improvements to the 127-year tramway which serves around 4 million passengers a year, mostly during the summer. The work has included construction of a new £20m seven-track depot by Volker Fitzpatrick as well as installation of new track and catenary upgrades by BAM Nuttall.
The new LRVs are 32m long and 2.65m wide. They each accommodate 148 passengers, including 74 seated, and offer space for wheelchairs and prams, while Bombardier says the vehicles improved carbody concept will help to protect against corrosion, a particular problem in the coastal environment.
Blackpool is the launch customer for Flexity 2 which has also been ordered by the Queensland government for use on the Gold Coast Rapid Transit light rail line.
Categories: Europe, Light Rail, News
Tags: Blackpool, Bombardier, Britain