THE first Flexity Freedom LRV for the initial phase of the Ion light rail network in the Canadian city of Waterloo was loaded onto a lorry at Bombardier’s plant in Thunder Bay, Ontario, on February 15 in readiness for delivery, which is expected to take 10-12 days. 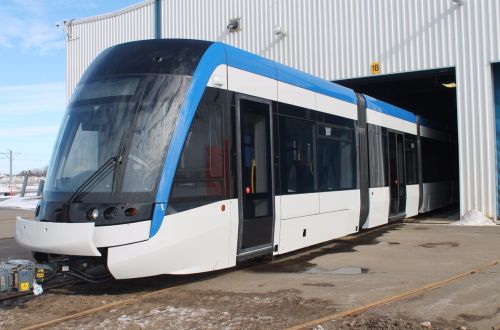 Stage 1 of the Ion project involves constructing a 19km 16-station light rail line from Conestoga Mall in Waterloo city to Fairview Park Mall in neighbouring Kitchener, together with a 17km Bus Rapid Transit line from Fairview Park to Ainslee Street in Cambridge.

The light rail line is being constructed by the GrandLinq consortium under a 33-year design, build, finance, operate, and maintain contract awarded in 2014.

Bombardier is supplying 14 Flexity Freedom LRVs worth $C 92.4m ($US 70.9m) with an option for 14 additional vehicles. The LRVs are being supplied as part of a larger order for 182 vehicles for Toronto and Hamilton transport authority Metrolinx. However, the programme has been beset by delays and has recently erupted into a legal dispute between Metrolinx and Bombardier.

The first vehicle for Waterloo was originally due to arrive in August 2016, but last April Bombardier told the regional government that it would not be able to deliver the LRV until October. In May 2016 the region pushed the opening date back to 2018 when it became clear that deliveries would not start before December.

Testing of the first vehicle is now expected to begin in the Spring on the section between Northfield station and the intersection of Caroline and Erb in Waterloo. The LRV will be publicly unveiled at the line’s depot in April.

While Bombardier originally intended to build all 14 LRVs at Thunder Bay, assembly of the 13 remaining vehicles has now been switched to the company’s plant in Kingston, Ontario. The first of the Kingston-built vehicles is due to be delivered to Waterloo in June or July.