UNITED States transportation secretary Mrs Elaine Chao attended a groundbreaking ceremony at the site of the future Union Square station in Somerville, Massachusetts, on June 25 to mark the official start of construction on the extension of Boston’s light rail Green Line. 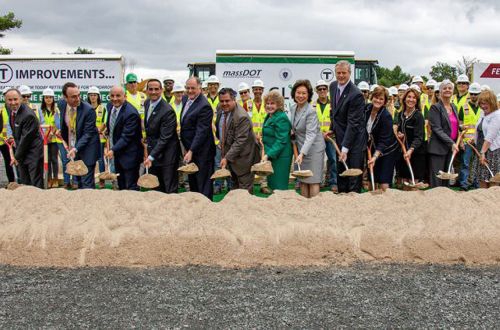 The 6.9km Y-shaped will extension from a relocated Lechmere station in East Cambridge to College Avenue in Medford and Union Square in Somerville, adding seven stations to the network.

During the groundbreaking ceremony officials from the US Department of Transportation confirmed that $US 225m in federal funding had been released for the project.

In January 2015, a Full Funding Grant Agreement (FFGA) between Massachusetts Bay Transportation Authority (MBTA) and the Federal Transit Administration (FTA) was signed that established the scope of federal participation in the Green Line extension. Under the FFGA, the federal government will contribute $US 996m towards the revised budget of $US 2.3bn.

The project has also received $US 50m from the city of Somerville and $US 25m from Cambridge.

In November 2017, MBTA’s Fiscal and Management Control Board voted unanimously to award the design-build contract to GLX Constructors, a joint venture of Fluor Enterprises, The Middlesex Corporation, Herzog Contracting and Balfour Beatty Infrastructure.

Preliminary works including vegetation clearance and utilities diversions are now underway and major construction will begin in the autumn. The extension is due to open at the end of 2021.