Completion of GLX project has added two branches at a cost of $US 2.3bn. 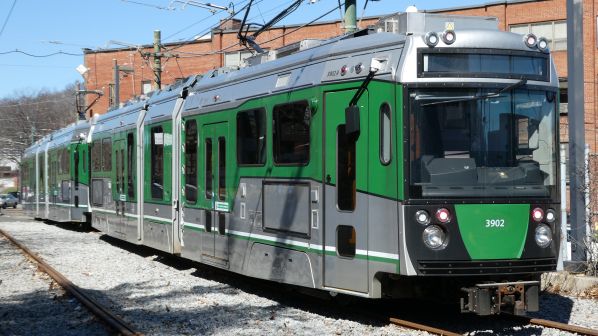 The project has seen the Green Line extended by a total of 7.6km with construction of the Union Square branch, which opened in March, and now the new Medford branch at a combined total cost of $US 2.3bn.

Both branches leave the main Green Line at the reconstructed Lechmere station in East Cambridge, where the former at-grade station was replaced by an elevated facility on the extended Lechmore Viaduct. The GLX project has seen a total of seven new stations built, in addition to an LRV stabling and maintenance depot at Somerville.

The opening ceremony for the Medford branch was held on December 12 and Balfour Beatty, part of the GLX Constructors joint venture which built the lines, said that this marked completion of the GLX project.

Five of the new stations built by the joint venture are on the 6km Medford branch, which uses the existing Lowell commuter rail corridor from Lechmere station to College Avenue at Tuft University. The five new stations are: East Somerville, Gilman Square, Magoun Square, Ball Square, and Medford/Tufts.

“I couldn’t be more proud of our Balfour Beatty team and partners for officially completing the final line of MBTA’s Green Line Extension project,” says Balfour Beatty senior vice president and managing director of US rail operations, Mr Mark Konchar. “Opening the Medford branch is a monumental milestone in the project’s delivery. Balfour Beatty looks forward to finishing final stages to prepare for project closeout in 2023.”

Other work undertaken by the GLX Constructors joint venture has included: adjusting the catenary on the East Cambridge Viaduct to eliminate temporary speed restrictions and to allow trains to run at up to 40km/h; final testing and integration of points, power cables, signalling equipment and digital communications between the Medford branch and the MBTA Operations Control Centre; and installation of remaining sound barriers along the Union branch.

“The opening of the Medford branch of the Green Line today marks another remarkable accomplishment for the MBTA after many years of hard work and billions of dollars in investment in the system, culminating in improved transit options for current and new riders to come,” says MBTA general manager, Mr Steve Poftak. “We’re excited to become an integral part of the landscape of these new neighbourhoods that we now serve, and the MBTA looks forward to offering expanded Green Line service for many years to come.”

Planning of the GLX project began in 2006 but construction did not start until 2012 and was suspended in 2015 while options to reduce mounting costs were evaluated. Main construction work only began in 2018.