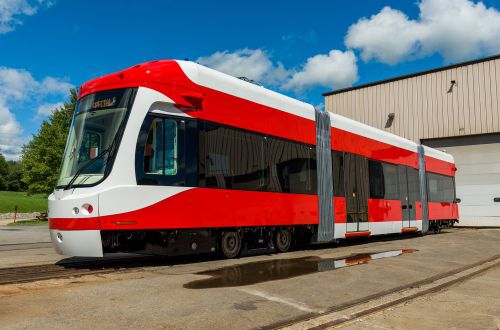 The three-section bidirectional vehicles will operate without catenary on 60% of the 5.3km QLine along Woodward Avenue, drawing power from an onboard energy storage system which utilises 750V lithium-ion batteries. The 70% low-floor vehicles will also operate in catenary-free mode around the line's depot.

Each 20.3m-long vehicle accommodates up to 125 passengers, 32 of them seated, and is equipped with four 99kW ac traction motors.

M1 Rail, the non-profit organisation established to design, build and operate the QLine says it expects dynamic testing of the first LRV to begin within the next few weeks following the completion of mechanical checks and final assembly.

The five remaining LRVs will arrive by the end of the year and the QLine is now expected to begin carrying passengers in April.