PLANS to extend Budapest metro Line 4 east from its current terminus at Keleti have effectively been abandoned after the municipal goverment voted instead to expand the city's tram network. 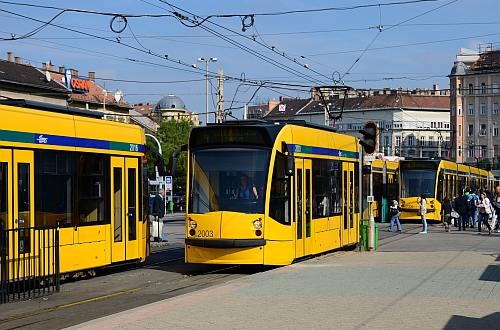 Under the new proposals a new tram line will be constructed from Astoria to Újpalota, while tram Line 1 will be extended north to Aranyvölgy and Line 60, the city's rack railway, will be extended at both ends.

By building a tram line along Rákóczi út and Thököly út, metro Line 4 will essentially feed into the tram lines towards the eastern suburbs of Budapest, instead of the tram feeding the metro line. This will bring back trams back to Thököly út more than 20 years after the closure of Line 67, and the line along Mexikói út will also be rebuilt.

The new line to Újpalota will essentially be an extension of former Line 44 while both lines will run parallel to metro Line 2 between Baross tér and Astoria.

The mayor of Budapest Mr István Tarlós has argued for some time that the extension of metro Line 4, which opened last June, is not a cost-effective use of public funds.

Line 1 will be extended from Bécsi út to Aranyvölgy where it will interchange with the newly-electrified Budapest - Esztergom suburban line, while the rack railway will be extended along the existing tram line to Széll Kálmán tér (former Moszkva tér), a major public transport interchange on the west bank of the Danube, and also from the upper terminus at Széchenyi-hegy to Normafa, a popular walking and skiing area in the hills above the city.

Planning of these two projects will cost roughly Forints 500m.