BUDAPEST Transport Company (BKV) began operating over the 3.2km southern extension of its circular tram Line 1 on March 20, when trams began using Rákóczi Bridge across the Danube, which was built 20 years ago with space allocated for the track. 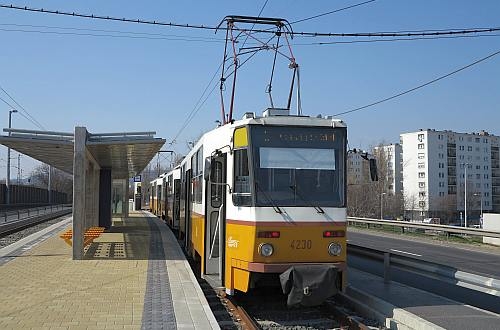 The extension from Közvágóhíd serves four intermediate stations before reaching the new - albeit temporary - terminus at Etele út/Fehérvári út.

Funding has already been approved for a further 1.7km extension to Etele tér adjacent to Kelenföld main line station. The project is due to be completed by 2020.

At the northern end of Line 1 another 3km extension has also been approved which will take trams to the future Aranyvölgy station on the Budapest - Esztergom heavy rail line.

Prior to the construction of the new extension, the existing section of Line 1 was rebuilt, including some turfed sections. Services are currently operated by Czechoslovakian-built Tatra T5C5 trams but by the end of the year, 12 new CAF low-floor LRVs will also be introduced. These will be the longer version of the 47 vehicles now on order from CAF, with a length of 56m, making them the longest trams in Hungary.