BUDAPEST added three more stations to its extensive tram network on July 8 with the opening of the 1.7km extension of Line 1 from Fehérvári út to a new terminus at Etele tér adjacent to Kelenföld metro and main line stations. 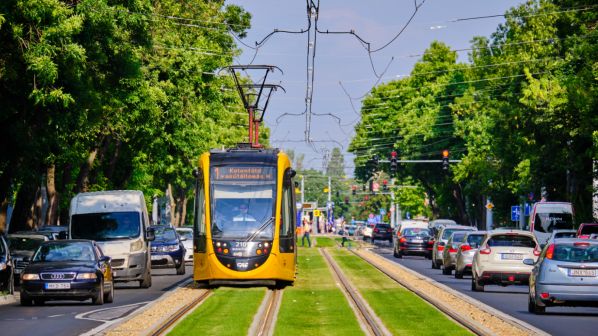 The Forints 8.63bn ($US 30m) extension was built by a consortium of Colas and Siemens.

The extension takes the total length of Line 1 to 18.3km, equal to Line 41, which was previously the longest tram line in Budapest.

Line 1 is also Budapest’s second-busiest tram line, carrying around 153,000 passengers a day as well as the city’s fastest, with an average speed of more than 22km/h, making it faster than metro Line 1.

The extension is fully accessible for passengers with reduced mobility and track is covered in turf for most of the new section’s length. In addition to the construction of tramway infrastructure, the project included rebuilding adjoining pedestrian areas and green spaces.

The line is currently served by a mixture of older Tatra T5C5, newer Siemens Combino and CAF Urbos trams, with more CAF vehicles due for delivery between September and December.

The extension towards Kelenföld has been planned since the opening of the Rákóczi bridge across the River Danube in 2005. The bridge was constructed with space for two tram tracks between the carriageways of the road.

Tracks reached the bridge in 2000 but were only extended to Fehérvári út in 2015. The extension completes tram Line 1 for now, with connections to metro Line 4, long-distance buses and MÁV-Start main line train services at Kelenföld.

An extension of the line north from Bécsi út to Aranyvölgy is planned in the longer-term.