THE Polish city of Bydgoszcz expanded its metre-gauge tram network by nearly a third on January 16 with the inauguration of the 9.3km extension from Fordońska/Wyscigowa to Loskon in the northeastern district of Fordon. 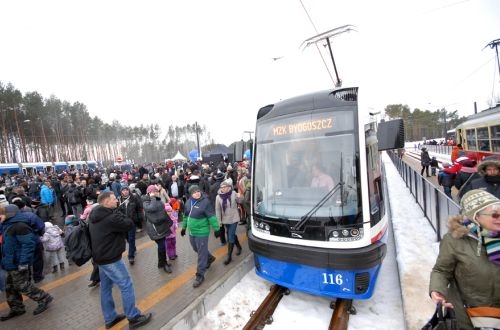 Passengers enjoyed two days of free travel on the 12-station extension, which is served by lines 3, 5, 7, and 10.

The project cost Zlotys 290m ($US 70.5m) excluding rolling stock and was funded with the aid of aZlotys 209m grant from the European Union. Services are operated by a fleet of 12 new Swing low-floor LRVs supplied by local manufacturer Pesa at a cost of Zlotys 109m. The 30m-long 2.3m-wide vehicles, which are named after local figures of historical significance, accommodate up to 200 passengers and have a maximum speed of 70km/h.

The opening of the line to Fordon takes the total length of the Bydgoszcz tram network to 40.8km.