A light rail network is the centrepiece of a new transport plan for the French city of Caen, which was revealed on November 5 by Mr Joël Bruneau, president of the municipality of Caen la mer, and Mr Rodolphe Thomas, president of local transport authority Viacités. 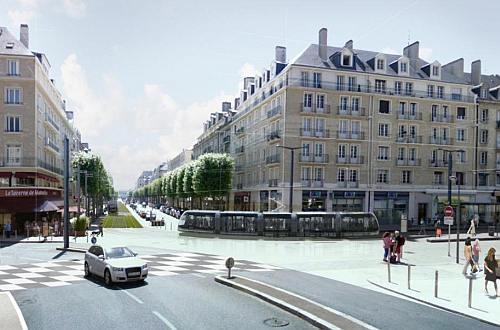 The 17.1km two-line network will have 31 stations and will largely replace the TVR guided trolleybus system, which has been beset by technical problems since it opened in 2002.

Line 1 will be 15.4km long with 25 stations and will link Caen Campus 2 and Herouville in the north with the city centre and the mainline station, before continuing south with separate branches serving Fleury-sur-Orne, where the depot will be located, and Jean Vilar.

The 1.7km Peninsula Line will serve six stations in the city centre, sharing tracks with Line 1 between Boulevard des Alliers in Saint-Pierre and Quai Amiral Hamelin, where it will diverge onto a short branch terminating at Presqu'ile.

Services will run at 10-minute intervals at peak times using a fleet of 24 32m-long low-floor LRVs. The network will be designed to carry up to 64,000 passengers per day.

The total cost of the project is expected to be €229.8m. A €36.6m grant request has been submitted to the French government and the Lower Normandy regional government is expected to provide €15m with a further €15m coming from the European Regional Development Fund. The municipal government expects to fund €130.4m through long-term debt.

Construction is expected to start in autumn 2017 and both lines will open in September 2019.

In addition, the transport plan envisages the construction of a western extension of the Peninsula Line by 2024.