THE French city of St Etienne officially launched its new fleet of CAF low-floor LRVs on May 3. 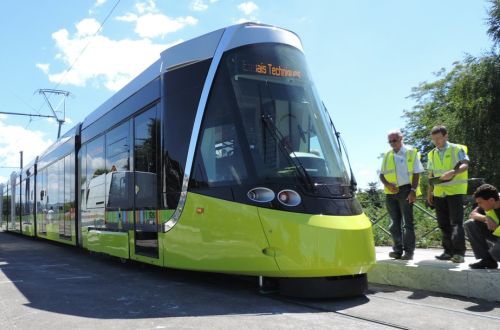 CAF was awarded a €42m contract in December 2014 to supply 16 vehicles for the city’s metre-gauge network.

The five-section LRVs are based on CAF's Urbos platform but have been specially adapted to St Etienne’s metre-gauge network through the use of a 2.15m-wide carbody. Unlike the network's existing vehicles, the CAF LRVs are bidirectional and feature additional doors for greater operational flexibility. Each 32.97m-long vehicle will accommodate 238 passengers (at 6 p/m2), 34 of them seated.

The trams were styled by Lyon-based design agency Avant Premiére and assembly was carried out by CAF France at its Bagnères-de-Bigorre plant in Occitanie.