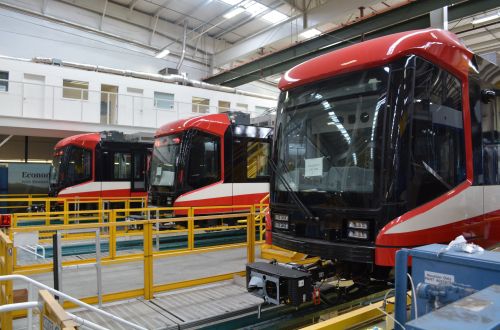 Canada’s federal government and the province of Alberta are each expected to contribute $C 12.5m ($US 9.3m) towards the extra vehicles with the remaining $C 5m coming from the city’s budget.

Calgary Transit awarded Siemens a $C 201.6m contract in September 2013 to supply 63 S200s, which will support the introduction of four-car operation and enable the withdrawal of the oldest U2 vehicles, which date from the opening of the system in 1981. However, Calgary Transit will still require 40 U2s after the final S200s from the initial batch are delivered later this year.

The S200s are being assembled at Siemens’ plant in Sacramento, California, and 19 units have been delivered to Calgary, with the first entering service last July.

The vehicles are known as Mask cars after the exterior design, which was inspired by an ice hockey mask and selected by the citizens of Calgary from three options in a public vote.