THE Regional Municipality of Waterloo in Ontario, Canada, has issued a request for qualifications (RFQ) for a design, build, finance, operate and maintain public-private partnership contract for the initial phase of the region's light rail project. 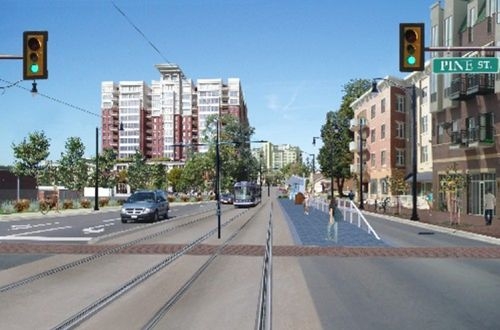 The 19km light rail line will run from Conestoga Mall in Waterloo to Fairview Park Mall in Kitchener and is part of a 36km initial network of light rail and bus routes that will connect the region's three cities of Cambridge, Kitchener and Waterloo. The population of the Waterloo region is projected to hit 729,000 in 2031, an increase of 200,000 people from 2003, and with the area's road networks already under considerable strain, a combination of light rail and bus, with a view to a later upgrade to light rail, is considered as the best solution to meet this growing demand for transit.

Applications for the RFQ close on November 23 at which point the municipality will select prequalified bidders for the 30-year contract. A fleet of 14 LRVs are expected to be required for operation on the line which has a projected ridership of 27,000 passengers per day during the first year of operation in 2017, rising to 56,000 by 2031.

The project for the 36km light rail and bus network has an estimated pricetag of $C 818m ($US 837.9m). The Province of Ontario and the Canadian government agreed to provide $C 300m and $C 265m respectively towards the capital cost of constructing the rapid transit system in 2010. The Regional Council followed in committing to meet its $C 253m share of the Stage 1 capital costs in September 2011.

For this tender and more, refer to IRJ's new Global Rail Tenders service at www.globalrailtenders.com