REVENUE services on the 12km Canberra Metro light rail line in the Australian Capital Territory (ACT) commenced on April 22, preceded by three days of free community events leading up to the official start of services. Around 25,000 people were carried during an eight-hour period on April 20. 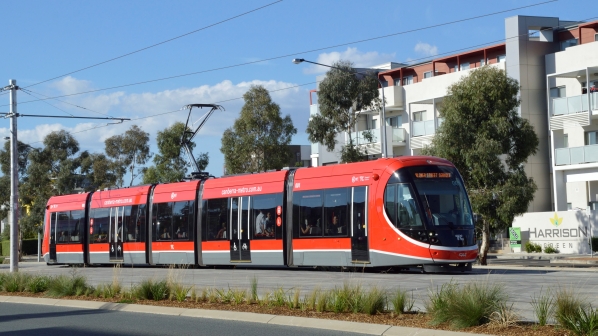 Media reports suggest that the overall construction cost is expected to be lower than the $A 707m ($US 503m) set out in the project’s business case, which had already been revised down from a previous estimate of $A 783m.

The project has been delivered through a public-private partnership (PPP) between the ACT government and the Canberra Metro consortium, which includes construction and operation of stage one of the network for 20 years. Operation and maintenance will be provided by UGL and John Holland in partnership with DB Engineering & Consulting.

The ACT government is offering free travel on all services for one month from April 29 to coincide with the launch of Canberra’s new integrated public transport network.

Planning and work on environmental approvals for the Stage 2 extension to Woden are continuing, though no specific timeline for financing and construction has been announced.