THE City of Cincinnati has selected CAF subsidiary CAF USA as the preferred supplier of five LRVs for the under-construction first phase of the city's light rail network. 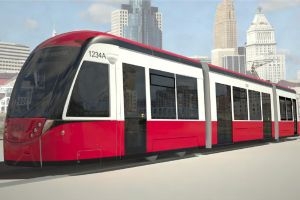 The City will now enter contract negotiations with CAF USA with the view of awarding a contract and issuing a notice to proceed. Under the terms of the contract CAF will have to comply with Buy American stipulations, which require 60% of the components to be sourced in the United States, with the manufacturer set to build the LRVs at its plant in Elmia, New York. CAF was selected over four other manufacturers that replied to a request for proposals issued in September 2011.
A groundbreaking ceremony was held on February 17 for the Cincinnati Streetcar project, the first $US 99.5m phase of which is a 7.9km loop covering 18 stations that will link the city's largest employment centres, Downtown and Uptown, and the Over-the-Rhine neighbourhood.
The announcement of the preferred supplier was made by Cincinnati Mayor Mr Mark Mallory, a staunch supporter of the project, during his State of the City address on Wednesday night. The proposed light rail network has previously been attacked by Ohio governor Mr John Kasich as a project that the state cannot afford to support.
Categories: Light Rail, News, North America
Tags: CAF, Cincinnati