The vehicles must be suitable for operation in Cologne and Bonn. 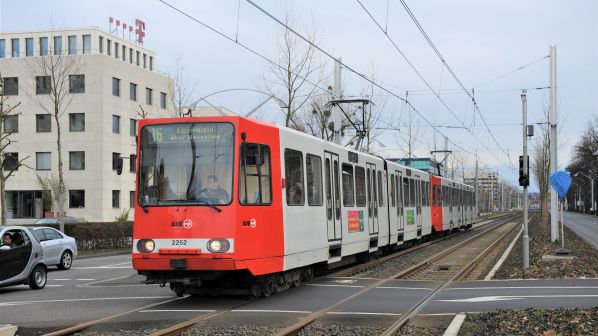 COLOGNE Transport Authority (KVB) has launched a tender to purchase up to 132 LRVs along with 34 intermediate sections. The LRVs must be suitable to operate on the Cologne and Bonn light rail networks, as well as the Ports and Freight Traffic Cologne (HGK) network between the cities that also carries freight services.

The vehicles must be high-floor articulated LRVs with a turning ball connection between sections. The contract includes the purchase of spare parts for the lifetime of the trains, along with an option for 60 additional LRVs and 23 intermediate sections.

The new vehicles will be designated type HF12. An initial batch of five prototype LRVs, designated as HFx, will be delivered in 2026 followed by series production in 2028.

The 1435mm-gauge LRVs will operate under 750V dc overhead electrification and must be 30m long and 2.65m wide, while the intermediate sections will be up to 15m long. The trains will have a minimum curve radius of 25m, a maximum speed of 80km/h, and an axleload of no more than 10 tonnes. The floor height will be 950mm, with capacity for at least 180 passengers including 58 seated.

The bidder must include a declaration stating they do not have any ties with Russian companies.

Bids must be submitted in German by 10.00 on June 24, with the tender to be awarded through a negotiation process.