A ceremony was held at Moëllesulaz on the French-Swiss border on February 20 to officially launch construction of an extension of Geneva light rail line 12 to the French town of Annemasse, which will restore an international link severed in the 1950s. 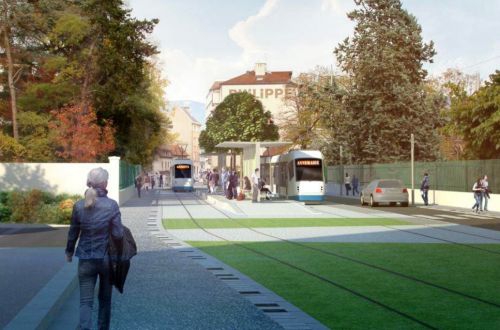 The 3.3km extension will serve seven new stations on the French side of the border and will be constructed in two phases. The initial four-station section between Moëllesulaz and Parc Montessuit will open in November 2019, with the remainder of the extension to Lycée des Glières due for completion in 2022.

The extension is forecast to carry around 8000 passengers per day when both phases are operational and services will operate at 8-minute intervals at peak times with a 25-minute journey time between Annemasse town centre and Geneva city centre.

The Swiss government is providing 40% of the €57m required for the first phase, with contributions from Annemasse agglomeration and the municipalities of Ambilly, Annemasse, and Gaillard (24.18%), the French state (11.45%), the department of Haute-Savoie (21.58%), the European Union (2.32%) and the French region of Auvergne-Rhône-Alpes (0.47%). The second phase has an estimated pricetag of €28.6m.

Annemasse was served by Geneva tram Line 12 until 1958, when the French section was abandoned.