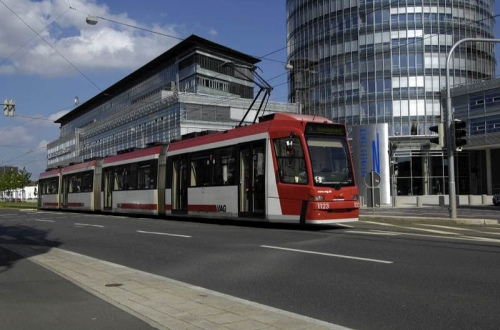 The proposed line will be an extension to the current Nuremberg tram network.

The special purpose planning organisation Zweckverband Stadt-Umland-Bahn, formed in March 2016 to bring together the local authorities in Erlangen, Herzogenaurach and Nuremberg, awarded the contract to a consortium of specialist consultancies: Gauff Rail Engineering, Rambøll and Obermeyer Planen & Beraten.

The contract covers the planning of the Erlangen and Herzogenaurach sections to the level required to enable final planning permission to be awarded in 2021.

The proposed light rail line will form a western extension of the existing Nuremberg tram network starting at the current 'Am Wegfeld' terminus of Line 4 serving the towns of Erlangen and Herzogenaurach northwest of Nuremberg.

If the project, currently estimated to cost €300m, gains planning permission in 2021, construction could begin in 2023 with services starting by 2027. It is envisaged services will be operated by Nuremberg tram operator VAG.

Tram-train or heavy rail operations were considered by using part of the Nuremberg S-Bahn system on part of the Fürth to Bamberg line south of Erlangen and re-opening of the former branch line from Erlangen-Bruck to Herzogenaurach. However, the idea was discounted earlier this year due to the number of conflicting movements this would impose on other trains south of Erlangen.

The planned light rail route will instead serve the area around the old station in Herzogenaurach but will use an entirely new alignment to the north of the old railway route from Erlangen city centre via Erlangen-Büchenbach.

A planned eastern branch of the new network was dropped earlier in the planning phase after local residents in one area to be served by it voted against funding its construction in a local referendum in 2015.