THE conversion of the Amstelveen hybrid LRV/light metro line linking Amsterdam South and Amstelveen Westwijk into a conventional light rail line has been completed, with the line due to reopen with the start of the 2021 timetable on December 13. 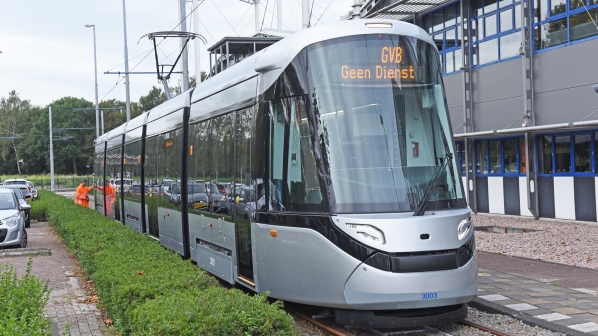 The infrastructure was handed back to regional public transport authority and city rail infrastructure owner Vervoerregio Amsterdam on August 17 after closing on March 3 2019, with testing and staff training now underway.

The line between Amsterdam South and Amstelveen Westwijk is no longer suitable for the high-floor vehicles that operate on the Amsterdam metro, and services will now be provided with new CAF Urbos 100 LRVs, designated as type 15G. Amsterdam Municipal Transport (GVB) awarded CAF a contract at the end of 2016 for 63 vehicles with an option for 66 additional units, with delivery and testing underway since last year.

The vehicle has been awarded a partial authorisation to place in service, as required by the Dutch Act for local railways, but is still awaiting the authorisation for operating in multiple. GVB plans to operate a large number of services with two LRVs coupled together.

While the new CAF trams on the Amsterdam tram network will be in a white and blue corporate livery, 25 of the vehicles operating on the Amstelveen line will be in R-Net livery, a combination of dark grey with red doors.

Some level crossings on the line have been converted to overpasses to improve safety.

A new stabling depot with eight tracks has been constructed south of Westwijk, where LRV maintenance and cleaning will be carried out.

The project cost €300m, including €225m from GVB and the municipalities of Amsterdam and Amstelveen and €75m from the Dutch Ministry of Infrastructure.

The line is now being extended 4km to Uithoorn, a town with 30,000 residents, with three new stops. The project is expected to cost €60m. The extension is due to open in 2024 with the new 15G LRVs under the name “Amsteltram.”