CRRC Changchun Railway Vehicles has unveiled a full-scale mock-up of the LRVs it is delivering for Tel Aviv’s Red Line project, which is on display to the public in the city centre. 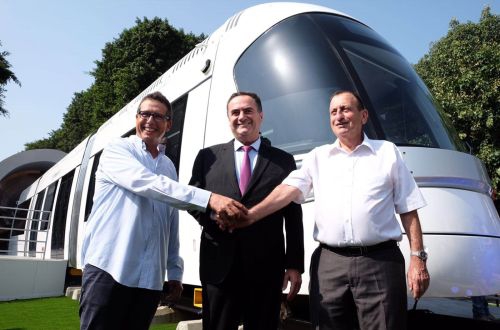 The mock-up unveiling ceremony was held at Rothschild Boulevard in the centre of Tel Aviv on September 13 and was attended Israeli transport minister Mr Israel Katz, NTA CEO Mr Yehuda Bar-On, and the mayor of Tel-Aviv Mr Ron Khuldai.

CRRC also signed a 16-year maintenance contract with Tel Aviv Metropolitan Mass Transit System (NTA) on September 12 for the 90 LRVs it is supplying for the 24km line, which is scheduled to open in 2021.

NTA signed the Red Line rolling stock contract with CRRC in November 2015. The Chinese company also opened an office in Ramat-Gan this week, and says it is eyeing further opportunities in the Israeli market.