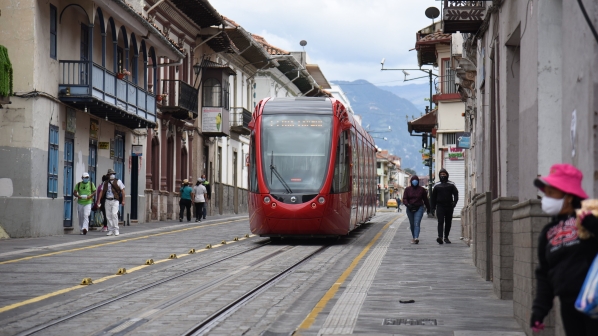 The construction contract for the line was first awarded in 2013.

The 11km line runs northeast - southwest through the city centre from Rio Tarqui to Parque Industrial via the airport, with 27 stops.

Transport is free for the first 60 days as part of a passenger orientation initiative, with eight LRVs operating at 10 minute intervals from 06.00 to 20.00. Passengers are required to wear masks on the trains and at stations, and vehicle capacity has been reduced to 30% to allow social distancing.

“This phase is one of education for citizens and we all have to adapt and educate ourselves in this new form of distancing,” says Cuenca Tram director, Ms Carolina Ormaza. “We provide both auditory and visual information to make passengers aware, and our staff constantly remind them of the rules that must be met.”

The initiative will also allow Cuenca Tram to adjust services as needed based on travel times, boarding and disembarking times, and other operational aspects.

Cuenca signed an operation contract with Metro Tenerife in September 2018. Under the $US 3.5m contract, Metro Tenerife was responsible for managing the seven-month pre-operations phase as well as the commercial operation of the line for three years.

Testing began in July 2018, when hundreds of residents lined the streets of the historic city centre to witness the inaugural test run.

The project, has been a long time coming, with a series of delays and new contracts required before the line was completed.

The Alstom-led GME Cita consortium, including CIM, Ineo, and TSO, was awarded a $US 142.6m contract in June 2013 to supply an integrated light rail system for the city, with Alstom completing the first of 14 33m-long Citadis LRVs in 2015.

However, the project came to a halt when the contract with the Cuatro Ríos de Cuenca Consortium (CCRC), which was also involved in the project, was terminated unilaterally by the Mayor’s Office of Cuenca for non-compliance.

The Autonomous Municipal Decentralised Government of Cuenca, Ecuador, selected the ACTN Consortium, comprising Alstom, Compagnie Internationale de Maintenance (CIM), and the NGE Group including its TSO track subsidiary, in September 2017 to complete the civil works for the line. ACTN.

The consortium was tasked with completing the construction of the new line, laying the track, electrification including the use of Alstom’s catenary-free APS system on a 2.1km section of the line in the city centre, and building a workshop and yard.

At the time, the mayor said that the new contract was awarded to “correct the biggest mistake the project had since the beginning" - the division of activities between two contractors, which required coordination between the CCRC Consortium and Cita.