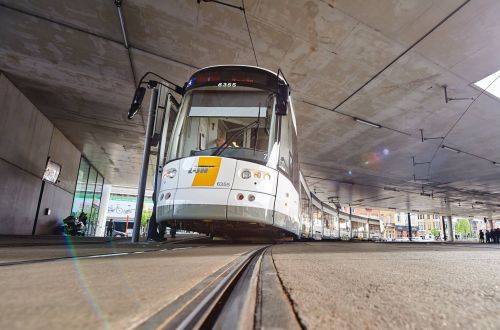 The deal has an estimated value of around €320m and is De Lijn’s largest-ever investment in new vehicles. The order will enable the replacement of the coastal fleet and PCC trams in Antwerp and Ghent, as well as increasing fleet capacity for operation on new lines. Delivery of the metre-gauge vehicles is due to start in 2018.

According to the tender, which was issued in March 2014, De Lijn requires 62 LRVs for the West Flanders coastal line linking Knokke, Ostend and De Panne, including five vehicles for a proposed extension to Veurne. Antwerp will receive 66 LRVs and Ghent 18 units.

CAF’s competitor in the tender, Bombardier, has lodged an appeal against De Lijn’s decision, which is due to be heard by the Council of State on November 22.

The ACV union says it is concerned the decision to award the contract to CAF could jeopardise the future of Bombardier’s plant at Bruges, although the consequences for the facility if Bombardier fails to win the tender are not currently known.

In June 2015 De Lijn exercised an option with Bombardier for 40 additional Flexity 2 LRVs, taking its fleet of these vehicles to 88.