THE first of 18 CAF Urbos low-floor LRVs ordered by Debrecen public transport operator DKV in 2011 arrived in the Hungarian city on May 22. 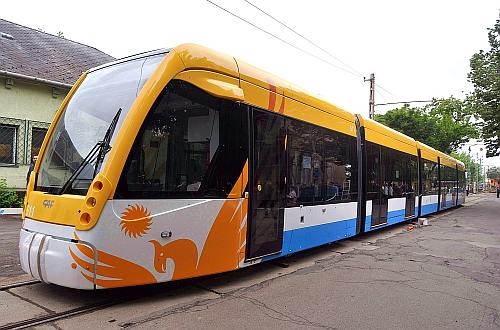 The five-section 600V dc bidirectional vehicles are 32.5m long and accommodate up to 211 passengers. They will enter service next year on the new Line 2, which will serve what is currently the city's busiest bus corridor, running northwest from the city's mainline station.

As Line 2 is not yet complete, the first vehicle will undergo 10,000km of endurance testing on Line 1. The second vehicle is due to arrive from Spain next month and CAF will hand over the final LRVs in the first half of next year.

A part of the project a new maintenance building has been constructed at DKV's existing tram depot to service the CAF fleet.

The City of Debrecen awarded the €37.9m contract to CAF in October 2011, following a lengthy public tendering process. The order was eventually placed after the sixth call for tenders, due to fluctuating exchange rates and voided tendering results.