Trams return to the Motor City

TRAMS carried passengers along Woodward Avenue in Detroit for the first time in 61 years on May 12 with the inauguration of the 5.3km Q Line from Larned Street to West Grand Boulevard. 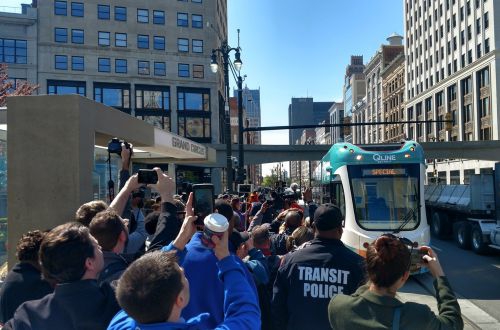 The $US 140m project is claimed to be the first public-private partnership deal to be funded by private businesses and philanthropic organisations, in partnership with local, state and federal governments.

The project was also supported by the federal government through a $US 25m grant from the Transport Investment Generating Economic Recovery (Tiger) programme.

In 2007 the project’s backers formed M-1 Rail, a non-profit organisation, to lead the design, construction and operation of the 20-station line. Stacy & Witbeck was subsequently awardedthe contract to build the line and major construction began in July 2014.

Services are operated by a fleet of six bidirectional Liberty LRVs supplied by Brookville Equipment Corporation.

The 20.3m-long three-section bidirectional vehicles will operate without catenary on 60% of the line, drawing power from an onboard energy storage system which utilises 750V lithium-ion batteries. The 70% low-floor vehicles will also operate in catenary-free mode around the line's depot.

Each vehicle accommodates up to 125 passengers, 32 of them seated.