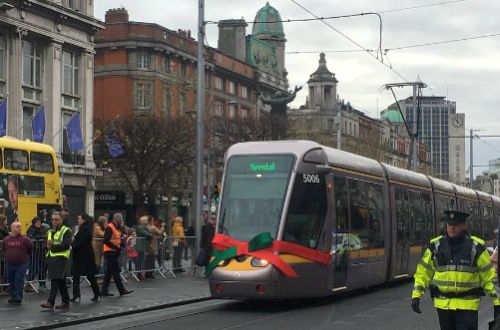 The extension serves 13 stations, including the first interchange between the Red and Green lines and a connection with Irish Rail (IE) inter-city and commuter services at Broombridge.

The 5.9km extension runs north from the former Green Line terminus at St Stephen's Green, crossing the Red Line at the junction of O'Connel Street Upper and Abbey Street and serving the new Dublin Institute of Technology campus at Grangegorman before terminating at IE’s Broombridge station.

Alstom is supplying seven 54.9m-long Citadis LRVs for the extension, and the new trams are 11.6m longer than the standard vehicles in service on the Green Line. Platforms on the existing section of the Green Line from St Stephen's Green to Sandyford are being lengthened to accommodate the longer vehicles.