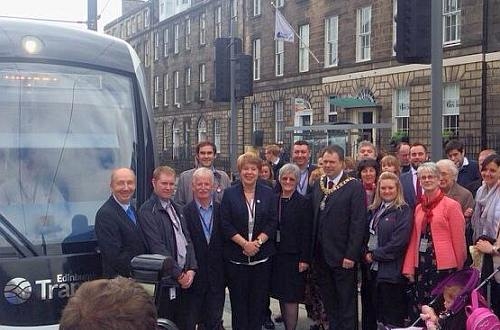 Public services are due to start on May 31 on the 16-station line from York Place in the city centre to Haymarket, Murrayfield Stadium, and Edinburgh Airport.

The project has been beset by issues including major contractual disputes and a funding crisis which delayed the project by nearly three years and led to the cancellation of the section of the route between York Place and Leith.

Even with the reduced scope of the project, costs soared from an estimate of £375m in 2003 to £521m when construction contracts were signed in 2008 and a final revised budget of £776m was agreed in 2011. With interest payments on a 30-year loan taken out by Edinburgh City Council to cover the funding shortfall expected to reach around £200m, the final bill will be nearly £1bn.

Services are operated by a fleet of 42.8m-long Urbos LRVs supplied by CAF although only 17 of the 27 vehicles ordered are required to operate the shortened route.

Despite the enormous difficulties encountered in the first phase of the project, the city council has not ruled out future expansion of the network. "There are no current plans to look at extending the line and it would be inappropriate to do so until we've had a chance to review the service's performance over the first six months or so," says Hinds. "I've called for a report to be presented to the council before the end of 2014 so that future options can be debated."