TESTING of Edinburgh's much-maligned inaugural light rail line is due to commence from November 26 when overhead 750kV dc powerlines on the initial 2.8km section between the depot at Gogar Castle Road and Edinburgh Airport go live. 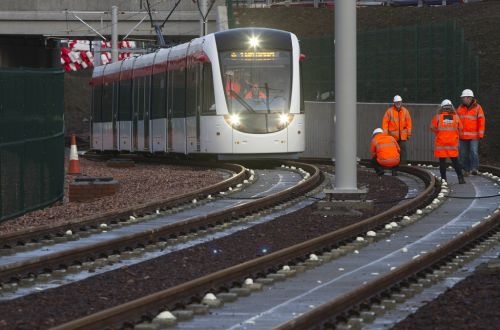 LRV and system testing is the final part of the development of Edinburgh Tram's inaugural section B, which will be the first stage of the 13.5km, 16-station line from the airport to York Place station in the city centre to be completed. Contractors Bilfinger Berger and Siemens are due to hand over this section in March, with the line set to open to the public by July 2014.

Construction of the line got underway five years ago, but political wrangling has resulted in numerous delays, project downsizes and cost overruns. The revised budget now stands at £776m, with around £100m currently unspent.

CAF is supplying 27, 42.8m-long low-floor LRVs for the line, the first of which was delivered in April 2010. Testing of the LRVs has been taking place on a 500m track section from Gogarburn station to the depot since last December.