THE CEO of Erfurt Transport (Evag), Ms Myriam Berg, and Mr Peter Jenelten, Stadler's vice-president, sales and marketing, officially signed a contract for the delivery of 14 new LRVs on October 29, with delivery of the first vehicles planned for the end of 2020. 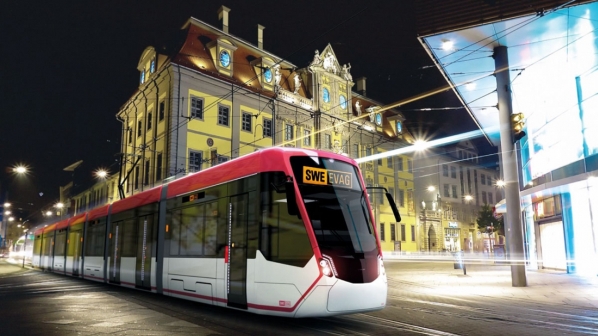 Evag announced on October 1 that it had selected Stadler Rail for the €56.2m contract to supply 14 low-floor LRVs, with an option for 10 additional units.

The new 42m Tramlink trams are 14m longer than the current MGT6D trams and can accommodate up to 248 passengers, including 102 seated.

The barrier-free passenger areas feature wide gangways, a continuous low-floor, seven doors, and seating above the bogies that is accessible without steps. The trams also feature special parent-child seats that are one-and-a-half times the width of a standard seat. Separate areas near the five double-doors facilitate the transport of strollers, while two separate areas are intended for wheelchair users. The passenger information system provides up-to-the-minute updates.

“We are pleased to be able to use Tramlink to align a modular and flexible vehicle precisely to the requirements of Erfurt,” Jenelten says. “Despite its length of 42m, the vehicle is ideally suited to negotiating narrow curves. The unique steering system, combined with an innovative bogie concept, ensures smooth cornering and a smooth and comfortable ride. At the same time, Tramlink is extremely quiet.”

“Our drivers can also look forward to the new trams,” Berg says. “The ergonomically designed driver's cab allows a good view in city operation. It is equipped with air-conditioning and a modern on-screen vehicle control system.”

The order, which has been placed following a competitive tender, is being funded with the aid of a €15m grant from the European Regional Development Fund and €11.2m from the state of Thuringia’s public transport investment programme.