GERMANY's Federal Ministry of Transport and Digital Infrastructure (BMVI) has agreed to allocate €23m through the Municipal Transport Financing Act (GVFC) to fund a €55m project which will increase capacity on the metre-gauge tram network in Freiburg-im-Breisgau. 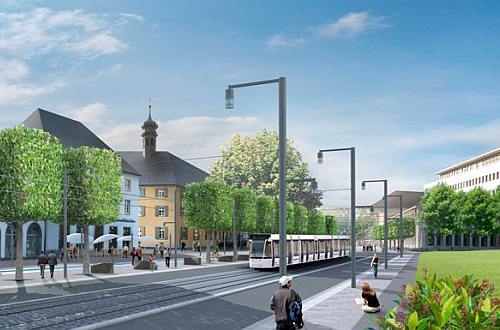 The Rotteckring project involves constructing a 2.4km link with five stations, which will run from a triangular junction at Siegesdenkmal on Line 2, passing through the old town along Rotteckring, Werthmannstrasse and Kronenstrasse to join lines 3 and 5 on Basler Strasse.

The number of passengers using Freiburg's tram network increased from 29 million in 1984 to 76 million in 2012 and additional capacity is now needed on the network. The Rotteckring line will relieve the interchange at Bertoldsbrunnen and improve access to northern and western parts of the city centre, while also improving step-free access to the tram network in this area.

Construction is expected to begin on the link before the end of this year and the start of commercial servcies is scheduled for 2018.

Last year Freiburg Transport ordered 12 low-floor LRVs from CAF to support the expansion of the network.