THE state government of Baden-Württemberg has submitted a €67m funding application to Germany's federal government to help finance the construction of a second metre-gauge tram line in the city of Ulm. 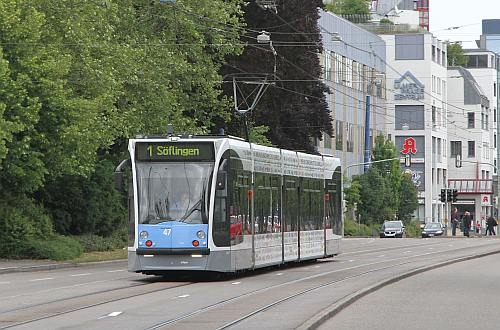 Line 2 will run for 11km from the Science Park in the northwest of the city to the main station and Kuhberg in the southwest. The line will share tracks with Line 1 for a distance of 1.5km around the main station.

Approval of the application is expected by the end of the year, which will allow construction to start on the €155m project early next year. The city of Ulm is expected to provide €53m and the state of Baden-Württemberg will provide €24m.

The project is now in the final stages of obtaining planning permission and work such as the €11m expansion of the existing tram maintenance depot, funded by the City of Ulm, is already underway.

Up to 12 additional LRVs will be required for the expansion of the network, supplementing the fleet of eight Siemens Combino vehicles which have been used on Line 1 since 2003.

The most recent addition to the Ulm tram system was the 4.6 km extension to Böfingen, which opened in March 2009.