THE first of 10 ground-power LRVs being built by CRRC Dalian for the first light rail line in Zhuhai has been commissioned. 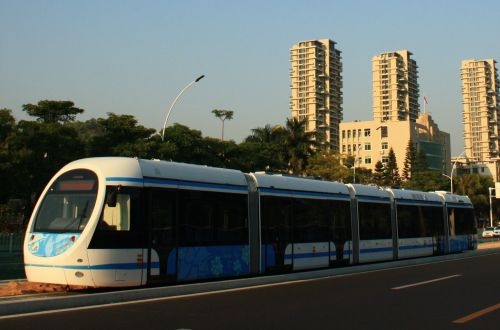 The 8.9km line, which connects Shangzhong with Haitian Park, is entirely catenary free due to the prevalence of typhoons.

CNR Dalian signed a 10-year licensing agreement in 2012 with AnsaldoBreda, Italy, for the production of Sirio LRVs in China, while Ansaldo STS signed a similar agreement with CNR Dalian and General Resources Company for its TramWave ground-power supply system. Trial operation started in November 2014 with the first two Sirio LRVs on a 1.7km section.
Zhuhai intends to build another 10.2km section under phase 2 of the project, while a second line is planned as part of a 147.3km network.

CRRC Dalian will build six LRVs for the Xijiao Line in Beijing once the Zhuhai vehicles have been completed. Production is expected to reach 100 LRVs next year.