ALSTOM handed over the first of 19 Citadis low-floor LRVs for Paris light rail Line T7 to Mr Jean-Paul Huchon, chairman of Ile-de-France Transport Authority (Stif), in a ceremony at its La Rochelle plant on January 12. 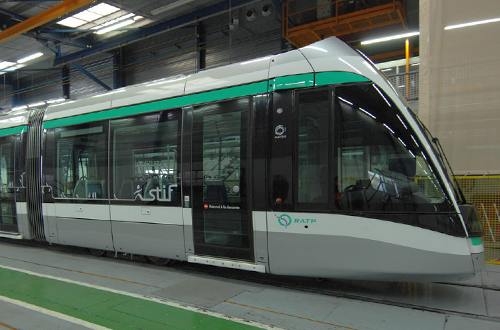 The vehicle is the first of 70 LRVs ordered in January 2011 for Lines T7 and T8 in a deal jointly funded by Stif and Paris Transport Authority. Due to open at the end of this year, Line T7 is 11.2 km long and will serve 18 stations in the districts of Villejuif and Athis-Mons with projected daily ridership of 36,800. A second phase will extend the line 3.8km south to Juvisy-sur-Orge with six additional stations.

The second batch comprises 20 vehicles for Line T8, an 8.5km line from Saint Denis Porte de Paris to Epinay-sur-Seine with a branch to Villetaneuse University.

Vehicles for both lines will be 32m long and 2.4m-wide with capacity for up to 200 passengers.

Alstom says it delivered a record 270 Citadis LRVs last year, which means a new vehicle rolled off the production line on average every 18 hours.