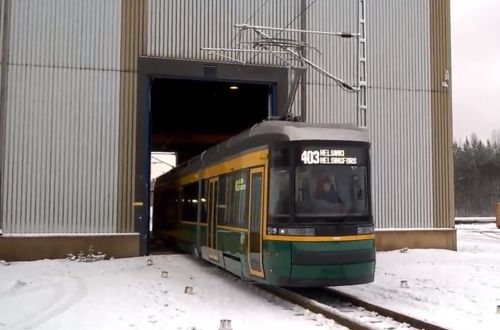 The vehicle is also the first tram to be completed at the plant since Škoda Transportation acquired a controlling stake in Transtech in August.

HKL signed a €113m contract with Transtech in December 2010 for 40 of the 27.6m-long three-section LRVs, which accommodate up to 199 passengers, 88 of them seated. Passenger feedback, operational performance, and ease of maintenance were key considerations, and these factors have been evaluated extensively during a two-year trial with two pre-series vehicles.

HKL says reliability, availability and customer feedback have been "extremely good," with only minor changes to the specification for the production vehicles, which will be delivered between early 2016 and May 2018.

Traction systems were supplied by Voith, and a separate motor-gear unit with a continuous output of 65kW drives each of the eight axles, which receive power via two EmCon double traction inverters. Voith also provided wheels, axles, bearings, drive-related vehicle control, and the diagnostics system.

The vehicles are equipped with an intelligent braking energy management system, which enables braking energy to be stored in specially-designed onboard heat exchangers for use in the heating system if it cannot be fed back to the grid via the overhead catenary.

The Artic is also able to automatically prevent excessive horizontal acceleration in curves by measuring the offset angle between the bogie and the vehicle to determine the curve radius. If the vehicle is travelling too fast, a control device automatically limits the speed, minimising centrifugal forces.