THE first catenary-free test run on the new light rail line in the Australian city of Newcastle took place overnight between October 22 and 23, with an LRV operating along Hunter Street under its own power. 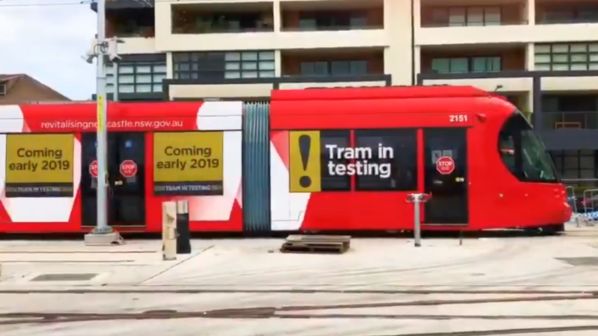 The first of six battery-equipped CAF Urbos LRVs was delivered in September and has been undergoing safety checks. Initial powered tests of the brakes, onboard energy storage and charging systems are being conducted at night to ensure the system is operating safely and efficiently under controlled conditions.

Testing over the coming weeks will include a range of simulations such as filling the tram with weights to mimic the dynamic behaviour of a fully laden vehicle, and testing the traffic signal interactions at pedestrian crossings and intersections.

Daytime testing will involve simulating timetables and driver training, with services on schedule to begin in early 2019.

The LRVs are equipped with batteries which will be charged at each stop in the time it takes for passengers to alight and embark. The city’s wire-free technology is part of the New South Wales government’s $A 35m ($US 24.7m) effort to reduce the 2.7km line’s visual impact.