THE first of a fleet of 120 1524mm-gauge LRVs ordered by Moscow tram operator Mosgortrans from a joint venture of Pesa, Poland, and Uraltransmash, Russia, entered trial passenger operation in the Russian capital on June 1. 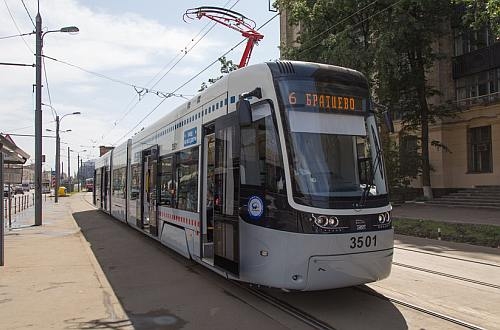 The 26m-long three-section Fokstrot accommodates up to 160 passengers, 60 of them seated, and is capable of operating in temperatures as low as -40°C.

The first two vehicles have been introduced on Line 6, one of the busiest tram lines in Moscow, which carries around 45,000 passengers per day.

"We are now embarking on the final stage of testing of the new trams," says Mosgortrans CEO Mr Yevgeny Mikhailov. "Testing has shown that the tram is safe and ready to operate in a real urban environment with passengers onboard."

Pesa has so far delivered four of the LRVs and Mosgortrans says it expects to receive 70 vehicles by the end of this year, with the remaining 50 units due for delivery next year.

The Fokstrots are being assembled by Pesa at its Bydgoszcz plant in Poland.