THE local governments in Bad Homburg and Frankfurt am Main have reached an agreement to construct a 1.6km extension of Frankfurt U-Bahn light rail line U2 from the current terminus at Gonzenheim to the S-Bahn station at Bad Homburg. A local referendum held in 2018 showed 70.3% of voters supported the project. 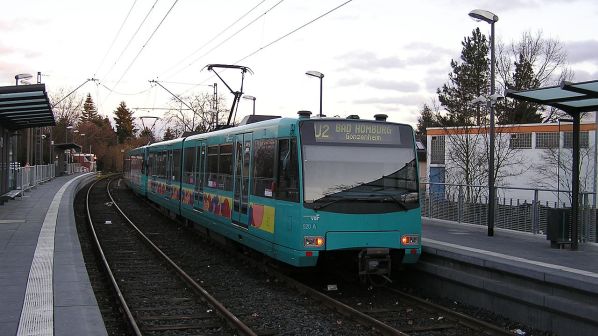 The planned route is partly underground and will begin approximately 190m southeast of the current Gonzenheim terminus, which will be demolished and rebuilt as a new underground stop. The new 350m single-track tunnel beneath Frankfurter Landstrasse main road will be built first as a cut and cover concrete box and equipped as other initial construction work is completed.

The remainder of the new U2 line will be built as double track parallel to the existing DB Networks line used by S- Bahn services on an embankment north of the heavy rail line. A new above ground U-Bahn station will integrate with the existing Bad Homburg station.

Construction is expected to begin in 2023 once planning permission is finalised. The project is expected to cost €56m with services on the line beginning in 2028. A 15-minute frequency is planned off peak with more services during peak hours.

The city of Bad Homburg will fund 20% of the construction cost with the state of Hessen and the German Federal government funding the rest of the cost.