OPERATION has commenced on the final 900m section of the 5km extension of Paris tram-train line T4, marking the completion of a project that was launched with a ground breaking ceremony in October 2016. 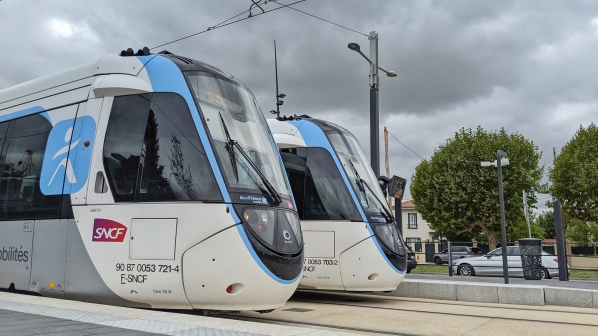 The beginning of services to Montfermeil Intercommunal Hospital on August 31 came eight months after services were launched from Gargan to the first eight stations along the line in December 2019.

The region of Ile-de-France provided 49% of funding for the full €275m extension project, with 37% coming from the French state and 14% from French National Railways (SNCF). In addition, Ile-de-France Mobility provided €100m for the new tram-trains and a new depot to maintain the fleet.

The new extension will offer a 30 minutes journey time between Montfermeil Intercommunal Hospital and Gargan, compared with the previous time of 50 minutes. The headway between services has also been reduced to 9min 30 seconds, and line operator Transilien SNCF plans to further reduced this to 7 minutes later this year.

Public areas around the line have been upgraded as part of the project, including the development of a cycle lane along the full length of the line.

Services are operated with 15 Citadis Dualis tram-trains ordered for €75m by SNCF on behalf of Ile-de-France Mobility in January 2016. The vehicles have an average speed of 20km/h in urban areas and a maximum speed of 100km/h in rural areas, and have capacity for 250 passengers.

The line is expected to carry 37,000 passengers a day, and has connections with RER lines B and E, bus network, and future metro lines 15 and 16.