THE US Federal Transit Administration (FTA) has signed a $US 670m construction grant agreement with Los Angeles Metropolitan Transportation Authority (LACMTA) to fund the city's Downtown Regional Connector light rail line, which is due to open in 2020. 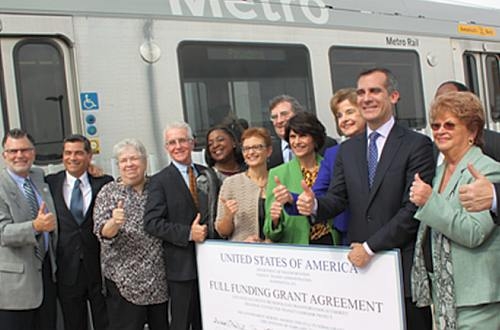 With the addition of an $US 160m Transportation Infrastructure Finance and Innovative Action (Tifia) loan from the US Department of Transportation (USDOT) and $US 64m in other USDOT funds, federal contributions will now meet almost half of the total $US 1.36bn cost of the project. The remaining funds will come from a local sales tax approved by Los Angeles County voters in 2008.

The 3km underground line will link the Gold Line in Little Tokyo with the Expo and Blue lines, which currently terminate at Flower and 7th Street. The connector will have three new stations: 1st Street and Central Avenue, 2nd Street and Broadway, and 2nd and Hope streets. LACTMA forecasts initial weekday ridership of around 60,000.

The project will reconfigure the three existing LRT lines into two lines, one running north-south and the other east-west, and for many passengers it will eliminate the need to make more than one change between light rail and the metro Red and Purple lines.

In 2011 LACMTA appointed a joint venture of Aecom and Parsons Brinckerhoff to carry out conceptual planning and preliminary design on the project.

In addition to construction work, the FTA grant includes funds for the acquisition of four new light rail vehicles to supplement the existing fleet.