THE Italian government has announced it will provide €125m in funding for the Bergamo - Villa D'Alme light rail Line T2 in Lombardy, allowing the project to proceed. 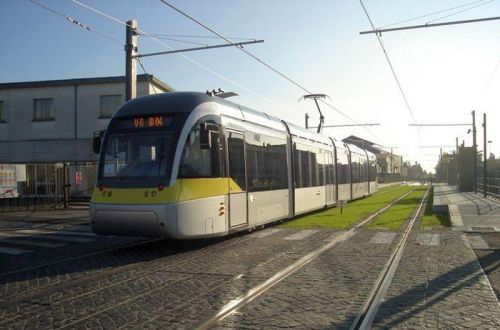 The announcement was made by the minister of infrastructure and transport, Ms Paola De Micheli, during the National Association of Building Companies’ (ANCE) “unlocking construction” meeting.

Another €40m for the €178.5m project will be provided by Lombardy region, with the remaining €13.5m funded by Bergamo Province and Lombardy.

Line T2 from Bergamo to Villa d'Almè will run on the former standard-gauge Brembana Valley Railway which was closed by Italian State Railways in 1966.

The new 11.5km line will have 17 stations, with the first four along the existing Line T1. Line T2 will have nine stations in Bergamo, two in Ponteranica, two in Sorisole, two in Almè and two in Villa d'Almè, with the possibility of two additional stops.

Line T2 will run on a dedicated double-track for 95% of its route, with an end-to-end journey time of 30 minutes. Services will be operated by 11 new 32m-long LRVs with capacity for 239 passengers, in addition to the 14 five-car LRVs operating on Line T1.

The line will have a maximum speed of 70km/h, decreasing to 50km/h in most urbanised areas between Ponteranica and Bergamo and 15km/h near road crossings.

A new depot will be built near the Petosino stop for up to 10 LRVs while a control room, warehouse and workshop will be based in Ranica for both lines.

Up to 15,000 passengers are expected to use the service daily, and the new line will be integrated with local public transport services.

Seven car parks with spaces for 900 cars, along with cycle tracks and footpaths, will be built by Bergamo Electric Tramways (TEB) along the route between San Fermo and Villa d'Almè.