GLASGOW City Council announced on November 24 that it has set out proposals to build a direct tram-train link between Glasgow Airport, Paisley, and Glasgow city centre. 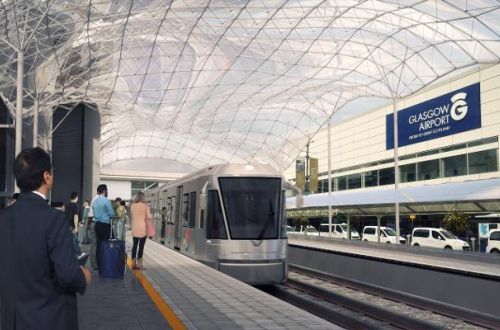 The £144m Glasgow Airport Access Project is part of the £1.13bn Glasgow City Region city deal and the Council says it will strengthen the city’s link to the rest of the world, making it a more attractive area for businesses.

Tram-trains which will use the existing line between Glasgow Central and Paisley Gilmour Steet before joining a new light rail line to the airport. It will support the growth of the airport, where annual passenger numbers are expected to rise from eight to 13 million by 2030, and support 7300 jobs in the area.

The plans are set to be endorsed by the Glasgow City Region Cabinet in December after being discussed by Renfrewshire Council and Glasgow City Council in the coming weeks. If approved, construction will begin in 2022 with operations starting in 2025.

“Improved transport connections will support the growth of the airport and open up the area to tourism and businesses, bringing inward investment and creating jobs for local people,” says Glasgow City councillor Mr Mark Macmillan. “It will also enhance the benefits of our other City Deal projects, which are designed to unlock our economic potential, creating a world class business and commercial location with excellent links across the Clyde and into our town and city centres.”

Currently, over 80% of airport passengers and staff travel to and from the airport by road but the new tram-trains will ease traffic on the congested M8 highway. The journey time is estimated to be 16.5 minutes.

The project is part of the City Deal programme which seeks to generate around £3.3bn of private sector investment, spreading the benefits of economic growth across Glasgow. It also aims to create 29,000 jobs across the region.