THE isolation of Austria’s oldest and shortest tram system came to an end on September 1 with the inauguration of the final section of the link between the Gmunden tramway and Gmunden - Vorchdorf Traunsee Line. 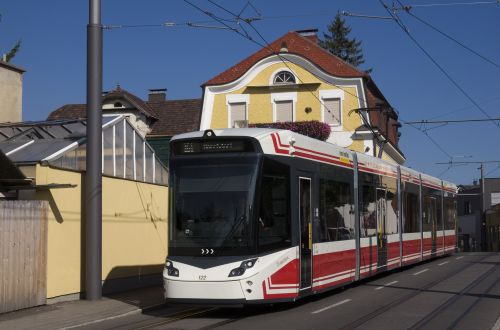 Construction of the Stadt Regio Tram connection started in 2013with the Gmunden Seebahnhof - Klosterplatz section opening in December 2014.

With the completion of the final section between Klosterplatz and Franz-Josefsplatz all services are now operated by the Stern & Hafferl (StH) fleet of Stadler Rail Valencia Tramlink V3 low-floor LRVs, which entered service on the Traunsee Line in 2016.

Three historic trams will be retained for excursions on the Gmunden tramway, which is one of the steepest adhesion-worked tram lines in the world, with a maximum gradient of 9.6%.

The double-track Klosterplatz - Franz-Josefsplatz section runs through the heart of the town and included the construction of a road/tramway bridge across the River Traun, replacing the existing road bridge.

At Engelhof two additional tracks have been built for overnight stabling of the new LRVs trams as the existing depot at Kraftstation is too small to accommodate these vehicles, although the depot has been retained to accommodate the heritage trams.