THE future of tram operations in the German city of Gotha appears assured after a proposal to replace the network with buses was rejected by the Thuringia state government on economic grounds. 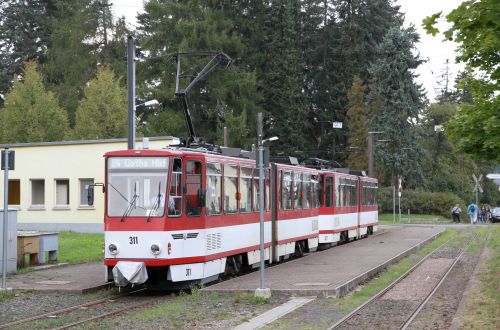 Local bus operator Steinbrück had offered to provide unsubsidised bus services on routes currently served by trams. However, Gotha Tramways (TWSB) and Thüringerwaldbahn have now been granted permits to continue operation of lines in the city as well as the 21.7km inter-urban line to Tabarz.

Steinbrück had proposed it could provide the same services using a new fleet of buses for less than the €2.8 million subsidy TWSB receives annually. The formal proposal to the Regional Administration in Weimar was made by Steinbrück on June 30, claiming that the use of buses, operating without subsidy, could save around €30m over 10 years despite the need to purchase 13 new vehicles.

TWSB currently has a contract that runs to 2024 but Steinbrück was attempting to exploit the fact that the five tram lines it operates are covered by permits that expire in July 2017. The Thüringerwaldbahn infrastructure has been extensively modernised in the last ten years and is in good condition, although the operation relies on relatively old trams.

The decision to retain the tram network makes it clear that the economic viability of the bus replacement proposal was the principal reason for its rejection, noting that it was unlikely a medium-sized company such as Steinbrück could absorb losses from the operation (and the cost of financing new vehicles) that could amount to several million euros. If the trams were removed and the bus operator then failed, the population served could be left with no public transport provision - a situation that was considered unacceptable.