HELSINKI City Council has approved the project plan for the Crown Bridges project to link the city centre with the island of Laajasalo, which includes the construction of a 10km light rail line. 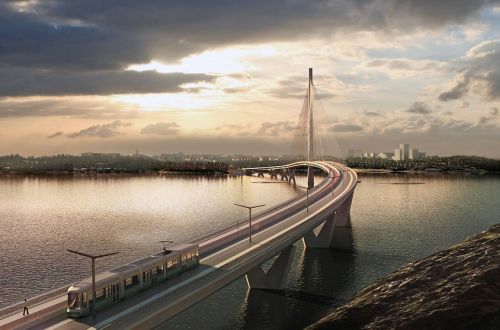 The €260m link is being proposed to serve extensive new residential developments in Kruunuvuorenranta and Laajasalo, which will house around 15,000 people.

Road links between Laajasalo and the mainland are limited and the existing bridges would not cope with a large increase in the island's population.

Three bridges totalling 2km are therefore proposed to carry a new light rail line, pedestrian walkway and cycle path. These include the 1.2km Kruunuvuorensilta, which would be the longest bridge in Finland.

Daily ridership is forecast to be around 37,000, with trams operating at 5-10 minute intervals, and the bridges would also carry around 3000 pedestrians and cyclists.

According to the project plan, construction could begin in 2018 and the line would be completed by 2026.

One requirement for the implementation of the project is the closure of the oil-fired Haansaari power plant by 2024, which has been approved by the city council. This would eliminate shipping movements around the island, enabling construction of the bridge.