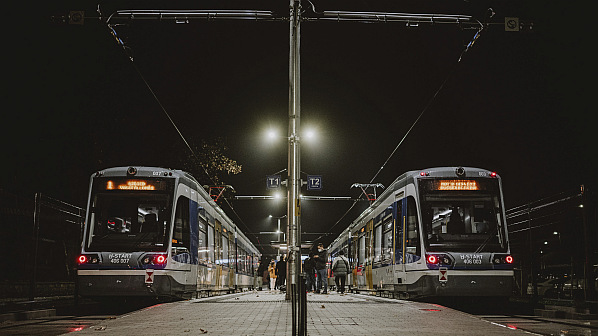 The service is hourly until mid-January 2022 when headways will be stepped up to 30 minutes outside peak hours and 20 minutes in the peak with additional night-time services. The vehicles leave the MÁV tracks at Hódmezővásárhelyi-Népkert and have three intermediate stops (two with a passing loop) before arriving at Hódmezővásárhely MÁV station. Journey times are currently 51 minutes for the full line and 40 minutes from centre to centre and are due to be reduced by nine minutes in the future. The timetable will be further fine-tuned in March.

Currently the system is under passenger load testing and the services can be used free of charge until April 15.

12 Stadler Citylink dual-mode 37.2m-long tram-trains are operating on the 31.6km line. The 71-tonne tram-trains can carry 216 passengers including 92 seated. They are equipped with air-conditioning, CCTV and Wi-Fi. Each vehicle has two special purpose areas which can accommodate two wheelchairs or four prams. Each tram-train is fitted with two diesel engines with an output of 390kW. In electric mode the LRVs operate on 600V dc. Operating on the main line they can reach 80km/h, but this drops to 50km/h on the light rail system.

Development costs including track, vehicles and a new depot at Szeged railway station totalled Forints 80bn ($US 245m) of which the depot and vehicles were financed by the European Union. The 12 CityLink vehicles cost $US 80m.