HUNGARY’s National Infrastructure Development Agency (NIF) has published a call for tenders for contracts to plan and build the Szeged - Hódmezővásárhely tram-train line. 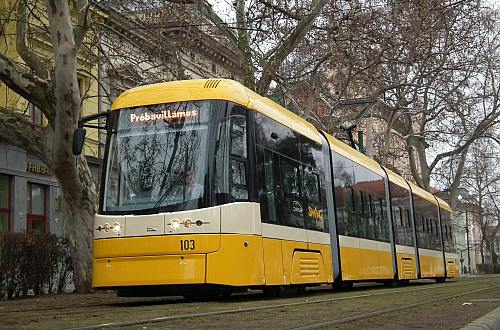 The project - Hungary's first tram-train line - involves constructing 3.3km of single-track line with passing loops in Hódmezővásárhely and an 800m connection from Szeged-Rókus station to the nearby tram loop.

Tram-trains will use the 22km unelectrified single-track line between Szeged and Hódmezővásárhely.

The project involves building catenary, signalling, stations, connecting roads, and car parks. The project is financed by the EU and the money available is Forints 13.25bn ($US 45.7m). The deadline for submission of tender documents is February 15 and the winning bidder will have 20 months to complete the project.

The tram-trains will be equipped to operate under the 600V dc electrification system used on the Szeged tram network and will operate in diesel mode on the line to Hódmezővásárhely.

The contract includes an option for four additional vehicles, reflecting the aspiration to extend the tram-train line from Szeged to Makó.

The vehicles will have at least 46 seats with standing room for a minimum of 92 passengers. The bi-directional low-flow tram-trains will be equipped with retention toilets, two spaces for wheelchairs, and four sets of passenger doors. The tender specifies a maximum speed of 100km/h, a minimum curve radius of 22m, and multiple operation both with vehicles of the same type and the Tatra trams used in Szeged.

The deadline for submission of tender documents is February 8 and the contract has an estimated value of Forints 10bn.