The line includes 19.6km of at-grade and 4.1km of elevated track. 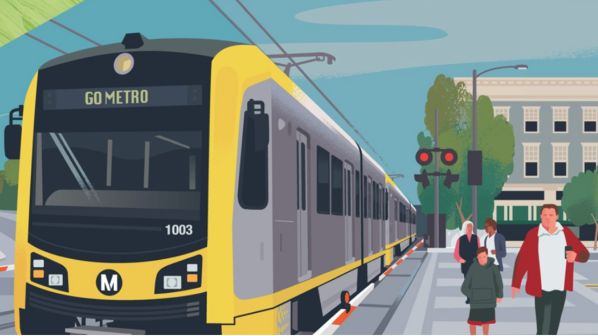 At its January 27 meeting, the LACMTA board signed off on the 23.8km Slauson/A Line to Pioneer route as the locally preferred alternative (LPA), which is slated to cost between $US 4.9bn and $US 5.1bn. It includes 19.6km of at-grade and 4.1km of elevated track, nine stations including six at grade and three elevated, and 31 at-grade crossings. The board also approved a maintenance and storage facility on a 21-acre site in Bellflower and Los Angeles Union Station as the northern terminus of the project.

The transit agency plans to complete a final EIS/EIR for the initial segment by early 2023, which it said would allow for ground-breaking in 2023 and completion by 2033-35.

At the same time, the remaining 7.24km Slauson/A Line (Blue) to Union Station section is still under study. LACMTA staff are expected to identify a cost-effective alternative to the elevated and underground route previously evaluated, which had a price tag (with the Little Tokyo station) of $US 4.2bn. That put the total project cost (not including the Little Tokyo station) at $US 8.567bn.

The board said the project will not be considered complete until it provides a direct service between Artesia and Union Station.

“The West Santa Ana Branch is not just a crucial project to deliver light rail to historically underserved areas of LA County, it’s an opportunity to stitch our region together and connect people to opportunity,” says LACMTA board director and Los Angeles mayor, Mr Eric Garcetti. “Through Measure M and collaboration across the county, we are improving congestion and air quality, and bringing high-quality public transportation to every corner of our region.”

“The action taken by our board really represents a renewed commitment on the importance this project brings to address equity, regional mobility, environmental and economic benefits for all the Gateway Cities,” says LACMTA CEO, Ms Stephanie Wiggins. “The project will greatly improve access to opportunities and improve transit service to low-income riders and communities of colour who have suffered for too long with higher-than-average rates of morbidity and mortality due to their exposure to air pollution and a lack of transit alternatives.”

For detailed data on light rail projects in North America and around the world, subscribe to IRJ Pro.